A Hero Mindset and Scorecards 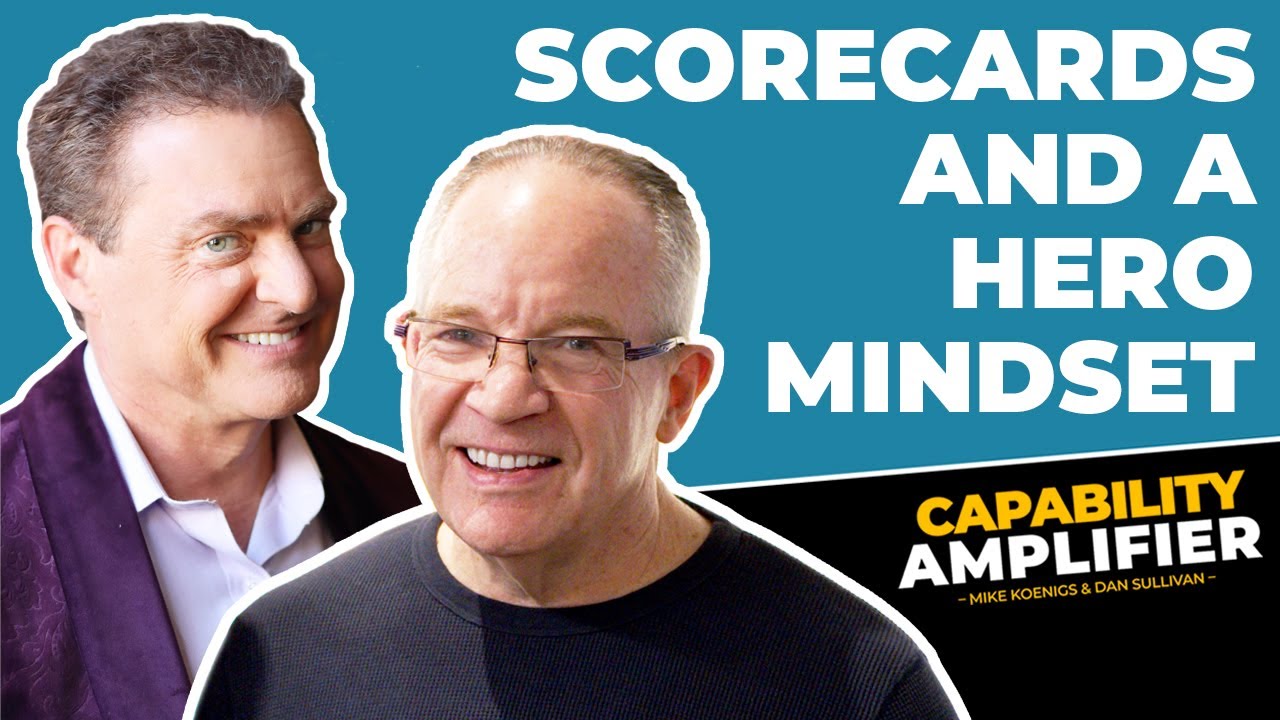 Imagine being able to attract a perfect, right fit client (what we call a “hero”) into your business.

How do you communicate to get anyone who's around you, whether it's an employee, a friend, or a spouse to get on the same page in the shortest period of time?

Every single one of Dan's 30+ books includes a scorecard with 8 mindsets. You look at the mindset, read some text and score yourself from 1 – 12. There are dozens of scorecards to measure every aspect of your life or business.

You can use scorecards to attract “right fit”, compatible people into your life. Whether they’re customers, spouses or partners.

In this episode, you’ll learn how Dan makes them and how you can adapt your brain so you can make them quickly too.

Listen on or watch us on YouTube to add this great Capability in your life and business!.

Dan created his first scorecard after his divorce in 1978. Back then there was a lot of encouragement from society to “work things out,” but Dan knew it wouldn’t work. They were going in completely opposite directions.

Then and there he made a commitment to himself that he would be married again but NEVER divorced.

During the time before the divorce, he realized that the problem was that he was looking for a person, and what he should have been looking for was a relationship.

He decided not to put his goals in terms of a particular type of person, but to outline some standards or what his relationship had to be.

The mindset “scorecard” was born.

He decided that his next relationship should not be one that required work but rather a relationship that just works. (Because his last one was ALL work)

One year to the day after his divorce and the scorecard were finalized, he was at a weekend conference and arrived late. There was only one seat left so he sat down. Next to him was a very tall redhead.

He looked at her a few times and she said “what are you looking at?” He said, “I’m looking at you and I like what I see.” They've been together ever since.

There was an ease and comfort to their relationship.

In both your personal and work life, trying to make relationships work is a very wasteful experience.

It’s all about creating the right of mindset. The behavior mindset. We generally get into trouble with people's behavior because we haven’t checked the mindsets out beforehand.

The big takeaway is effortlessness is the key function.

Recently Mike met with Kim White, his energy coach and one of the key things that he needs to work on is a very complex relationship that has turned weird because of a lack of communication. The thought of trying to make it work has kept Mike up at night.

There are a lot of positives about the relationship but the negatives, energetically, outweigh the incredible financial and celebrity aspects of it to the extent that it makes Mike feel gross.

Mike thinks it’s very important to check in with your body and say, “Do I feel good?” and “Am I happy?” “If not, why?” If it's out of your control and it's relationship oriented, take some inventory, and end it fast.

One thing that Mike's noticed as he ages is that he really sees how perfect nature is and how it's like tapping into universal consciousness. The way he has experienced things is the more he (you) meditates, more answers and solutions appear.

Dan has been meditating daily for 49 years but is not a believer in Universal Intelligence like Mike is. He believes that as a species we’ve had a couple of 100,000 years experience and our nervous systems have been formed out of a lot of struggle, persistence and breakthroughs.

He believes we're hardwired based on our experiences and when someone really gets in touch with who they are, major shifts happen.

A core secret to creating breakthroughs?
Dan says that you have to LIKE who you used to be.

If you're alway trying to get away from who you used to be, you haven't learned anything.

Dan believes that when people spend the time trying to understand WHO they actually are they will constantly grow and transform.

The more we get in touch with our experiences, the less conflict there is between what we're thinking and our feelings and when we communicate from that point… that’s when the magic happens.

To hear more strategies on how to implement the scorecard and hero mindset into your life PLUS a story Mike's never told before about his early days as a HACKER (you're not going to want to miss this one!)