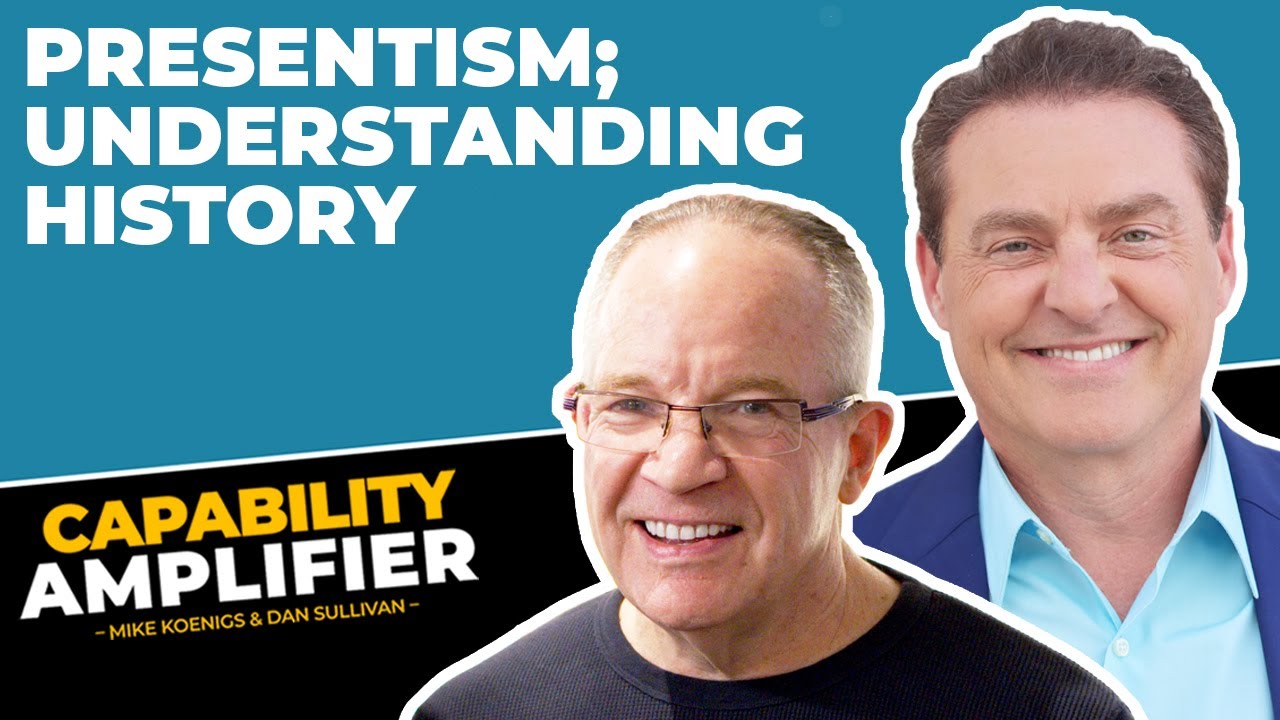 It’s defined as: uncritical adherence to present-day attitudes, especially the tendency to interpret past events in terms of modern values and concepts.

Today there is a general lack of understanding of history and geography.

Generation Z has been raised with their phones in their hands so history for them (unless it was forced on them by school) is based on YouTube, Instagram, Facebook and Snapchat.

Mike knows this from experience. His son, Zak, is 18. He was the last kid in his class to have a phone. Mike and his wife acquiesced because he couldn’t do his schoolwork without one. His entire generation communicates in ways Mike still doesn’t understand.

They learn through accidental browsing. The algorithm drives the content that is in front of them and whatever they see, they believe. At the same time, they don’t trust traditional “anything”. They trust themselves and only certain kinds of media.

Today Dan and Mike deep dive into what “presentism” is, why it’s happening and why it’s really important that we don’t forget our own history in order to be successful entrepreneurs.

Dan went to school in the 1950’s when they studied history, geography, civics, and religion. Part of your education was to learn things that happened centuries ago, in this country and around the world.

In talking to parents who are entrepreneurs – his Strategic Coach clients and their children really don't get history, geography, or the things that provide context for why things are they way they are. Most of their images of history comes through television, movies, and video games.

Their understanding of history is that things that happened before today are deficient versions of what they have now and therefore they can stand in judgment of how things were 100, 200, or 500 years ago.

On the other hand, when Hollywood does history, they give people who are depicted as living 500 years ago, modern emotions, modern attitudes, and modern thoughts.

The past is a foreign country.

You wouldn't be comfortable living 100 years ago. And if you did, you would bring back diseases that would wipe everyone out in about 30 days because your immune system is better now. You've been immunized to everything people died of back then. You wouldn't be a welcome guest.

There's a pasteurization of culture going on and we don't want people to have feelings that make them uncomfortable.

Virtually all of yours, Dan’s and Mike's growth in life has come from encountering things that were uncomfortable, getting used to it and building new insights and capabilities as a result.

When Mike thinks about presentism, it has to do with collapsing the trust barrier. In other words, a lot of history is being rewritten by present day outrage filters, or a lack of an ability to deal with discomfort.

Look at what universities have become. People are being banned from speaking and silenced on the left and right because it makes someone uncomfortable. Social Media, the best and most efficient delivery mechanisms we have today are selectively censoring, cancelling, and banning people.

It’s gotten ridiculous – some of Mike's very non-polarizing and educational videos are being flagged as being inappropriate and they can’t be boosted on YouTube. These are super benign content about health.

If growth comes from things that make us uncomfortable and building new insights and capabilities, how do we encourage curiosity, loving the discomfort and making that a habit and a discipline?

The best approach that Dan has found is getting people familiar and comfortable with their own history.

He’ll ask his clients about their childhood and what they were focused on. Maybe a goal that was beyond their present capabilities, and how they would go about achieving it or overcoming difficulty and transforming themselves, which is really the key to all history.

When Mike first joined Strategic Coach, he and Dan talked about the six companies heI created. Dan asked Mike questions that no one else had asked before and got him thinking about those experiences in an entirely new way. Mike had an audience. In the past, he didn’t see the connections between his first and sixth business without feedback. Dan pulled out common features of what Mike was looking for when he started a new business, what he learned from that and what they all had in common.

Most entrepreneurs don't like looking back. They want to get on to the next thing because they still feel the discomfort from earlier stages of their life. Dan says, “big deal, you're doing new things that are boosting your capabilities and confidence and things you've never done before.”

Instead of trying to get people interested in history, (like a history book,) get them comfortable with their OWN history. Eventually they’ll become comfortable talking to other people about their history, and at some point, they'll be comfortable dealing with it. They don't have to know the history of the country, but they have to feel it’s a PART of them. People need to be very interested in their OWN history to be successful.

The past is extraordinarily valuable and it should be respected.

There is an enormous amount of thinking that can be gathered in this episode and what we'd suggest to everyone who Listens or Watches…pay attention to how Dan thinks because there's some real gold in here! Don’t forget to text CA to (858) 434-5316 to receive a special mini-documentary from Mike.