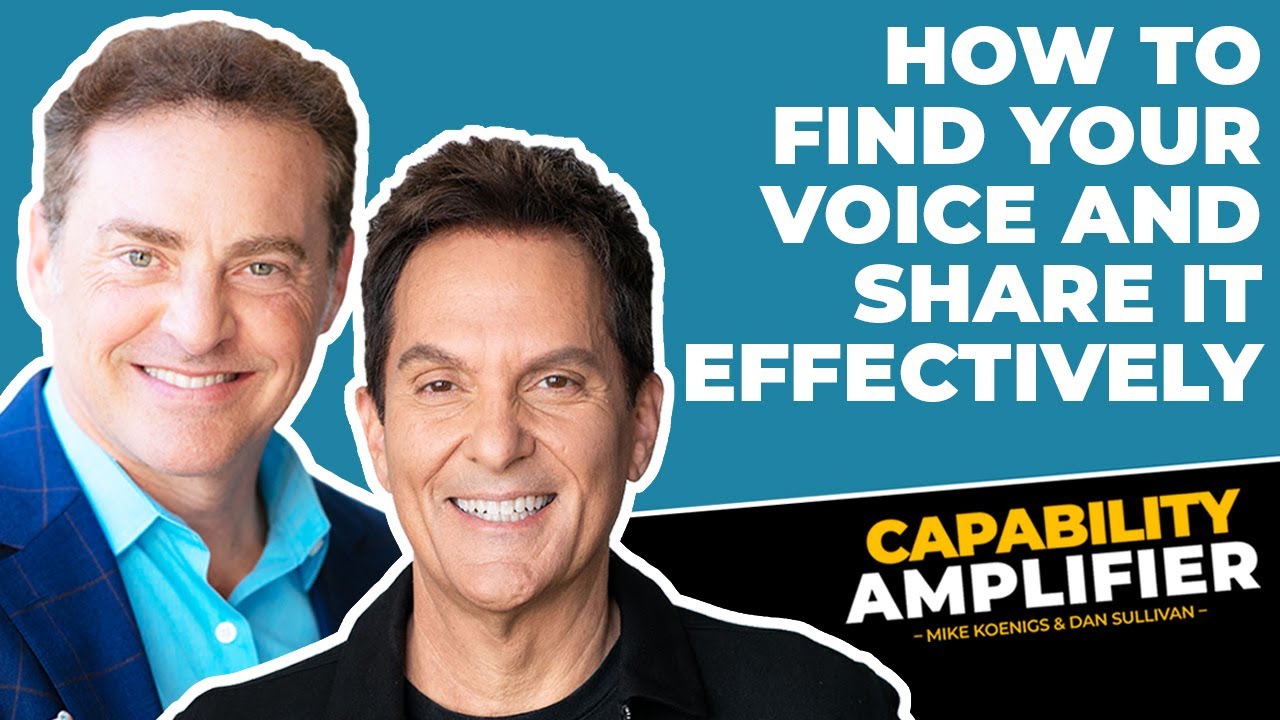 You’ve heard the expression, “find your voice,” but what does that really mean?

We all have a “voice” but do you think about using it to get more of what you want out of life?

Roger Love says we need to think about the sounds we make to have great conversations and move people emotionally, showcasing the very best of who we are in every business, or personal conversation and situation.

Roger has worked with some of the most famous singers, actors and speakers in the world. People like Reese Witherspoon, Bradley Cooper, Joaquin Phoenix, Jeff Bridges, Colin Farrell, Angelina Jolie and many, many more.

Roger says you are NOT the voice you were born with, but more importantly, he has some great strategies and ideas that will help you find your voice and share it more effectively.

Today you’ll learn what sounds are working for you and what sounds are not, PLUS… Roger will diagnose Mike and help him become a better speaker, step by step. This is an episode you really need to HEAR or or watch on YouTube.

Roger believes life doesn't exist without communication so he’s spent his life helping people figure out what sounds they should be making so that they can have communications that create the relationships, influence, and happiness that lead to them having a better life.

For 17 years, he only taught singers. (people like the Beach Boys, Earth, Wind and Fire and Luther Vandross) Then speakers like Tony Robbins and Suzy Orman started coming to him wanting to work on their speaking voices and that led him to where he is today. 50% of his clients want to sing amazingly. 50% of his clients want to be incredible speakers, influencers and presenters.

“We live in a world that believes that communication is word-to-word based. If you had the right words, you’d have a great conversation, start a relationship or complete a business deal… if you only had the right words.” But science has proven that the words you say are not effective in the way you should communicate with people.

The way the brain processes spoken information is first, for emotion, then for logic. Words by themselves have no emotion. You have to attach sounds to the words. Roger has spent years helping people stop speaking from word to word, and become in control over sounds like the pitch, the pace, the tone, the melodies of their voice, so that others will really understand how they feel when they speak and showcase the best of themselves in every communication.

Roger doesn’t work exclusively with celebrities and singers. When he’s training a superstar singer to sing, he’s helping them sell more tickets and t-shirts, but when he’s helping someone find their speaking voice… it changes their life because it actually influences the way that everyone perceives them.

People need to know that everyone needs a voice makeover. You’re not “trapped” with the voice you were born with. Most of us hate the way we sound when we hear ourselves on a recording. In fact one of the most popular hashtags in the last 10 years is #ihatemyvoice. We grow up hearing the way our parents and loved ones talk to us and mimic it but it doesn’t have to be permanent.

Think of it this way. Actors create characters for the roles they play but they’re not that person in real life, are they? Most of us have a work voice and a home voice and we all know what happens if you bring the work voice home to your family… It’s not very well received 🤣

Early on, Roger thought his job was just to teach people how to have great voices. Then he realized that was a small goal and he could use voice to help make great people. His goal is to help people use their voices to achieve the next level of success that they want, both personally and professionally, giving them the ability to communicate emotionally because the people that communicate emotionally, are the people that are remembered and believed.

They say that people don't remember what you say, they remember the way you make them feel and you're only going to make them feel things with the sound of your voice, not the words.

There was an article in ink magazine that said that the average company of 1000 employees wastes $60 million a year each in poor communication. If those same companies had even one leader that was an effective communicator and great speaker, they had a 25% after five years increase in revenue.

The greatest leaders of today and tomorrow are the greatest storytellers. They have to be able to move people emotionally, to take the action that they need to make the company thrive and it's voice more than anything else.

Roger firmly believes that the sounds that come out of your mouth, make you happy and healthy or unhappy and unhealthy and those same sounds are making the people that listen to you feel the same way. He’s trying to make a difference in the world by changing it one sound at a time and to that end he’s generously offered a $50 gift certificate towards his voice coaching program. Definitely check it out.

Listen now to hear Roger diagnose Mike's voice and give him advice on how to fix what he is doing wrong AND how he ended up enrolled in Roger's “perfect voice” program,” then go to Roger’s website to get a $50 gift certificate towards your own voice coaching.