How To Be Unforgettable and Get the Most Profitable Clients 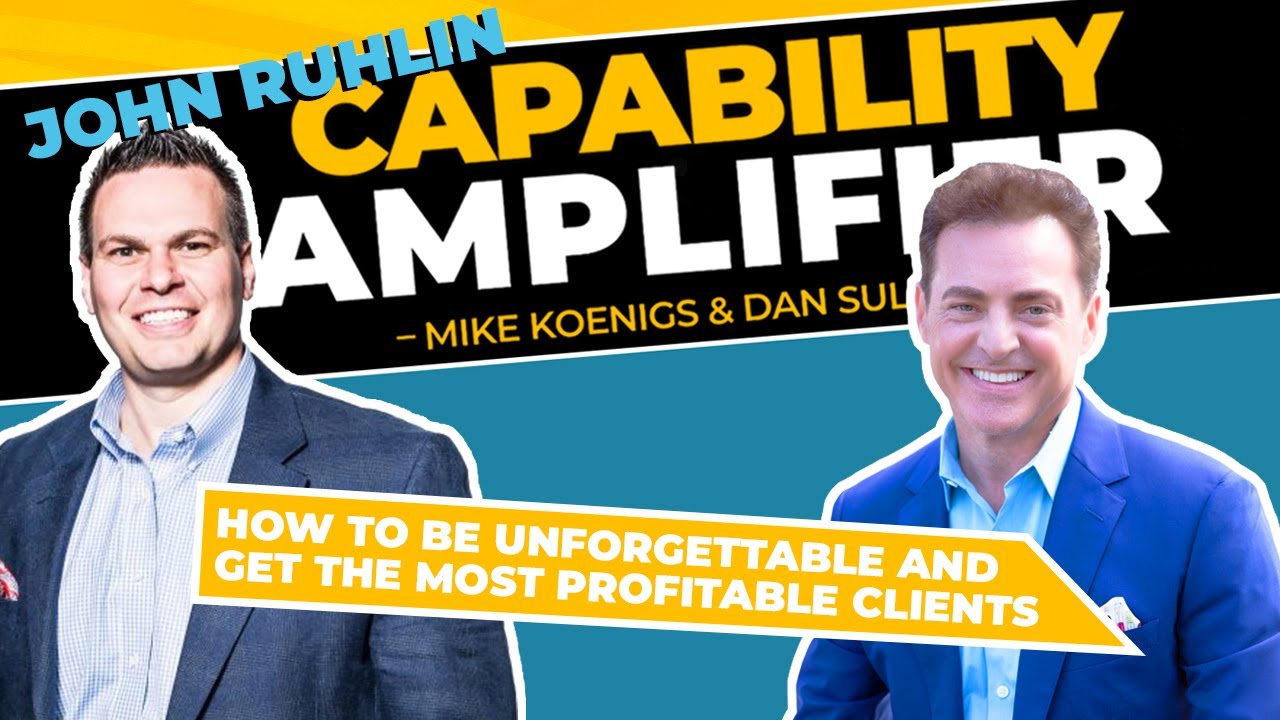 How do you get access to the unreachable? How do you become unforgettable?

That’s the focus of this episode of Capability Amplifier.

15 years ago, Mike Koenigs called a good friend who was buying three people $12,000 Rolex watches and thought he was crazy. “Why?” He asked! Keep reading or start listening…

You know that amazing, warm, fuzzy feeling you get when you receive or give a gift?

Did you know there’s a psychology and science behind gift-giving that could help you build incredibly strong business relationships, grow your business and make a ton of money?

Today on the Capability Amplifier podcast, Mike's special guest is John Ruhlin, the author of “Giftology: The Art and Science of Using Gifts to Cut Through the Noise, Increase Referrals, and Strengthen Retention.” John says that gratitude isn't a “woo-woo thing,” it's an ROI driver because “nobody cares about gifts, but we all care about relationships.”

John didn't grow up with a silver spoon in his mouth or in country clubs, in fact, it was the complete opposite. He’s a farm boy from Ohio who grew up milking goats and baling hay in a town of 417 people. Then his life completely changed because of a mentor.

When John was in college he had a girlfriend who’s dad, Paul, was this rainmaking attorney in a small town. When you're poor, you notice when people are generous and Paul was radically generous with everybody, whether it was the assistant, the janitor, or the CEO.

Paul would find deals on noodles and everybody at church the next Sunday would walk away with 200 cases of noodles and John would say to him, “that was $30,000 or $40,000! Are you nuts?” Paul would just smile. It wasn't tactical for him, it was just who he was. He exuded generosity and because of it, he owned oil wells, banks, real estate, and everybody came to him because he was the most liked, trusted, and top of mind person in the community.

John was selling Cutco knives at the time and decided to pitch Paul the idea of giving away pocket knives to all of his high-end clients. Paul didn’t like the idea of pocket knives but instead told John he wanted to order a bunch of his $100 paring knives. John was confused. He didn’t understand why Paul wanted to give a bunch of grown men and CEOs of billion-dollar companies a kitchen tool! What Paul told him next changed his life forever.

Paul said that after being in business for 35 years, he found that if you take care of the family in the business, everything else takes care of itself. It was at that point John had the epiphany that it wasn't about the silly knives. Paul understood that the knife was a delivery vehicle for an emotion. People loved and trusted Paul because he was always around even when he wasn't there because of gifts like this.

So John started mimicking Paul’s ideas and pitching to CEO’s of multi-million dollar companies. But rather than say “hey, I want to pitch you knives,” (because he’d be hung on real quick) he would mail these guys $300 carving sets with a handwritten note that said, “carve out five minutes for me,” and he’d get the meeting every time.

Inevitably when he’d walk into the board room for his meeting with guys in their 50’s and 60’s they’d be shocked at how young John was and they’d ask him, “Are you here to sell me knives?” John’s answer was always, “no, I'm here to help you and your thousand sales reps do exactly what I did to you and your top 10,000 relationships.”

By the time he was a senior in college, (out of 1.5 million sales reps,) he became number one at Cutco by applying what he now calls the Giftology System.

It's really about understanding the psychology of building relationships, inspiring them to refer you, open doors, be loyal, be engaged. All the stuff that we want in business with humans can be accomplished if we show our love and gratitude in a certain way. That's the core of Giftology that started 20 years ago by mimicking somebody who did it naturally.

When Mike first met John, he was really skeptical at first. It seemed like a dumb idea. However, Mike tried it. He sent some very meaningful gifts to his own sales team and some clients and the responses, reactions, and gratitude he got from everyone were phenomenal. If he hadn’t seen it and experienced it for himself, he wouldn’t have believed it.

To hear more about John’s brilliant psychology and science behind Giftology AND to hear the story of how Mike's friend Merlin Quiggle (no kidding!) gifted three, $12,000 Rolex watches to his most important business relationships, as a show of his gratitude and appreciation, listen to this episode right now, then watch the YouTube video here! And don’t forget to check out https://johnruhlin.com/

If you like powerful conversations with strong opinions, and elevated answers, head over to www.CapabilityAmplifier.comand scroll down to leave me a message, rate, review, and share!

After you listen to the interview, leave Mike a message and let him know what you think of this episode OR ask a question you’d like Dan or Mike to answer in an upcoming episode!

Look for the “Send a Voice Message” tool on the website. Dan and Mike give away cool gifts to a lucky winner every week. We think it should be you!