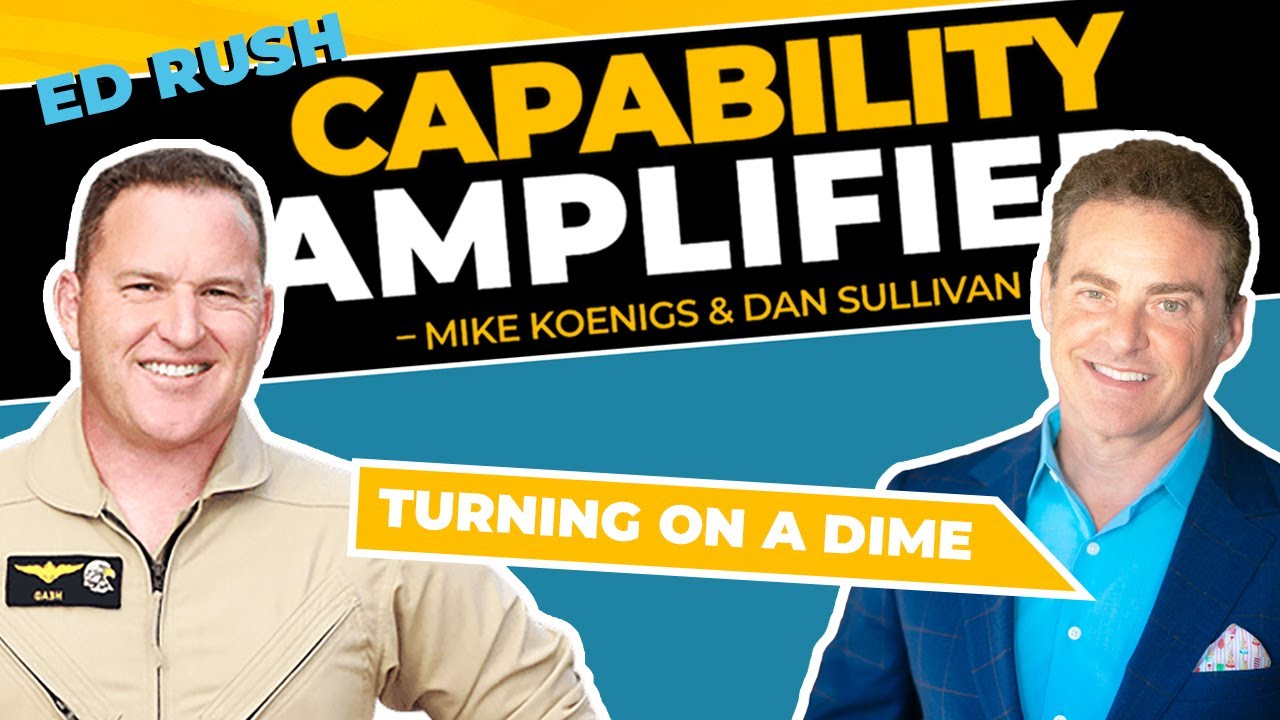 Imagine piloting a plane that’s 1000 miles away from land and your engine starts to fail… what do you do?

If you’re an entrepreneur, you can relate to this scenario because you're dealing with lots and lots of different “plane crashes” all the time, right?.

You need to be agile and change your focus to survive, especially in the climate we’re operating in right now, as a business leader and owner.

Our special guest on today’s Capability Amplifier is Ed Rush. He’s a good friend and former F-18 fighter pilot, entrepreneur, business coach and all around brilliant guy and someone we’ve worked with for 10 years.

Today we're going to be diving deep into all sorts of interesting stuff, including turning on a dime, creating regular content in shows and events and how the whole business (and life) climate has changed. We're also going to talk a bit about politics and getting attention in this crazy time (but not the kind of politics you're thinking about… politics and media.)

We didn’t pull the scenario of piloting a plane, being 1000 miles away from land and having your engine start to fail, out of thin air. It ACTUALLY HAPPENED to Ed. He was flying an F-18 fighter jet to Hickam Air Force Base in Hawaii when his engine literally started “eating itself” alive. Yikes!

Unless Ed did exactly what he needed to do, his plane would catch fire, explode, and he’d end up in some of the most shark infested waters in the world and a 2 day flight away from land. So he immediately pulled his engine back, shut it down and started emergency procedures.

Then what? How did he deal with the mental part? The first thing he did was take a BIG deep breath. Second, believe it or not, he smiled (because when you smile you’re telling yourself everything is going to be okay,) and third he did the next, most logical thing he needed to do to get himself to his destination… (You’ll have to listen to the whole episode to hear what that was!)

We're in the middle of 2020. Arguabley, the most volatile and STRANGE business year in the history of business years. Now is a really great time to smile and take the next, most logical step to get you to your destination because there WILL BE be some major winners that emerge from this insanity.

Right now we’re seeing some of the greatest opportunities in history, the greatest wealth transfer, and certainly the greatest shift in power. It’s not good or bad or right or wrong but what you make of it.

For the last 10 years we have been communicating to a world that fell asleep. We've got two parties that have droned people into submission. People have been watching things that are essentially boring them to death and all of a sudden in March of 2020, the world woke up.

Both Ed and Mike have sold more products, training, coaching and events in the last few months than they have in the last two years combined and it's because people have finally broken out of their stupor. When times are certain, people get complacent but when times are UNcertain people invest in speed and reinvention, and this is where we're at right now. So if you're a business owner, smile, because the opportunities presented to you when you can adjust quickly are incredible.

Being able to pivot on a dime, change your direction and focus according to what’s happening in the world around you is a HUGE part of being successful. It’s a skill every entrepreneur needs to master.

To find out exactly how Ed landed his plane safely and survived that super scary moment PLUS how he took this lesson, applied it to his life and business and went on to become a hugely successful entrepreneur and business coach, listen to this episode right now.